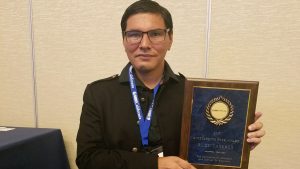 Since an early age, Rudy dealt with feelings of depression. When he graduated from high school, he thought he would be able to escape all the troubles that made his childhood traumatizing.

However, when he joined the Army, his mental health condition worsened due to the constant pressure enforced onto him. Rudy experienced a mental breakdown and was discharged. With no one to talk to, especially his family, due to feelings of shame and guilt, Rudy stayed silent. This led to him sinking into several years of depression. During this time, he was unable to hold down a job or be involved in a serious relationship, and he was constantly breaking commitments with friends and family.

His life changed once he experienced his first manic episode. After coming down from the mania, he chose to get treatment. Rudy was initially diagnosed with schizophrenia because of his catatonic episode in the army. He didn’t hear voices or have hallucinations but received treatment for schizophrenia for several years anyway. After his first manic episode, his diagnosis was changed to bipolar disorder, which he is successfully getting treated for today. “I’m glad I was finally able to receive a diagnosis that I felt truly fit the symptoms I was experiencing,” says Rudy. “It took a long time mostly because I was in denial, but now I have no problem openly discussing my diagnosis.”

Rudy tried many different medications and several therapists to varying success, but the thing that helps him cope above all is sharing his story publicly. “I couldn’t do it without acceptance and I’m thankful NAMI has given me a platform to succeed in life.,” he says.

To Rudy, recovery is continuing to share his story, even on days where he does not want to get out of bed. “I wish I could go out and share my story every single day because that is what helps me cope and it’s what ties my whole recovery together,” he says.

After several years of Rudy hiding his mental illness, he started coming out slowly to close friends. Then he shared his story online a couple years ago, so that everyone could know. His closest friends kept on loving him like they always have.
Rudy shared that in Mexican-American and Native American families mental illness can often be seen as a personal weakness, especially among men. He has been told to stop whining or just pray or take this root or drink this tea. Today, Rudy works on educating people in communities all over California about mental health. When he is not giving a NAMI presentation at schools, hospitals, or juvenile halls, he is spreading the work on Facebook and other social media platforms, engaging with not only friends and family but with people all over the world.

“I didn’t think I would ever be successful in anything and I certainly didn’t think I’d find success in anything having to do with mental illness, but now I feel as if this is my calling in life and I’m very excited for my future and educating people all over the world!” he says.

Watch Rudy share his story in a filmed Los Angeles performance series called “This is My Brave.”